Earlier this month in Kenya when Muslims had left the university to head to the mosque for their morning prayers, Al Shabab attacked and killed almost 150 Christian students still at the school.

Last year 3,000 Christians in Mosul, northern Iraq were told over loudspeakers to convert to Islam, submit to its rule and pay a religious levy, or be put to death if they stayed. 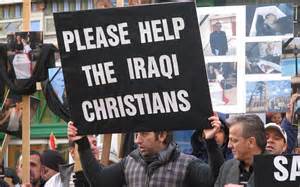 The last to leave was a disabled woman who could not travel. The fanatics arrived at her home and told her they would cut off her head with a sword.

Two years ago, Saeed Abedini, 33 years old and a pastor at Boise’s Calvary Chapel Church, was accused of trying to convert someone to Christianity and sentenced to 8 years in a Tehran prison where he languishes today. Abedini had traveled to Iran to visit family and help build an orphanage there.

Many of the comments that followed the article in the “Boise Weekly” mocked both God and Abedina, suggesting he should “have kept his mouth shut about Christianity.

Today Christians everywhere are being exhorted to “keep their mouths shut” about their faith. Everywhere I go, from public forums to social media forums, whenever someone speaks or posts anything Christian, the taunts, mocking, insults, hatred and the inevitable “take it somewhere else” trail the post like some sad yet revealing commentary on just where the world stands today on the subject of Jesus Christ.

“We will NOT have this man to rule over us,” Luke the physician and one of those who accompanied Jesus during His 3 ½ years’ ministry wrote of a parable Jesus taught them.

Jesus said to His faithful followers, “You are the light of the world. A town built on a hill cannot be hidden. Neither do people light a lamp and put it under a bowl. Instead they put it on its stand, and it gives light to everyone in the house. In the same way, let your light shine before others, that they may see your good deeds and glorify your Father in heaven.”

But today people are afraid. They are afraid of what their friends might think, they are afraid to speak up at work and risk losing their job, they are afraid of possibly being mocked, taunted, and ridiculed if they speak for what they believe. So instead, many are quiet, hiding behind a veil of “this is my personal faith and I don’t want to offend anyone by saying so….” Thus their faith becomes a well-kept secret and in many cases their friends, even family might be shocked to learn that they had a relationship with Jesus Christ at all!

Jesus said this: “Remember what I told you: ‘A servant is not greater than his master.’ If they persecuted me, they will persecute you also. If they obeyed my teaching, they will obey yours also.”

But sometimes the first hint of persecution and Christians slink away after apologizing for their offense, careful never to broach the subject again. We were warned what would happen at the end of this age, just before Jesus Christ would return: “But mark this: There will be terrible times in the last days. People will be lovers of themselves, lovers of money, boastful, proud, abusive, disobedient to their parents, ungrateful, unholy, without love, unforgiving, slanderous, without self-control, brutal, not lovers of the good, treacherous, rash, conceited, lovers of pleasure rather than lovers of God— having a form of godliness but denying its power. Have nothing to do with such people.” When I read the comments and posts on social networks, the vast majority of those posts reflect this admonition perfectly. People have indeed become unforgiving and arrogant, lovers of pleasure and money, wanting nothing whatsoever to do with the things of God.

So what should we do? None of us want to ridiculed, or jailed, or murdered for our faith. Pray. Pray that the Lord will give us the strength to stand. The Lord said, “I tell you, whoever publicly acknowledges me before others, the Son of Man will also acknowledge before the angels of God.” Our courage comes from God. Seek Him with all your heart, soul, strength and mind, ask that He fill you with His strength “that whenever we speak, words may be given to us so that we will fearlessly make known the mystery of the Gospel,” and in so doing perhaps save people from eternal damnation. If ever the time has come, it is now, it is today. Lord bless and strengthen you all. Amen.

One thought on “Scared to even utter the name Jesus Christ?”